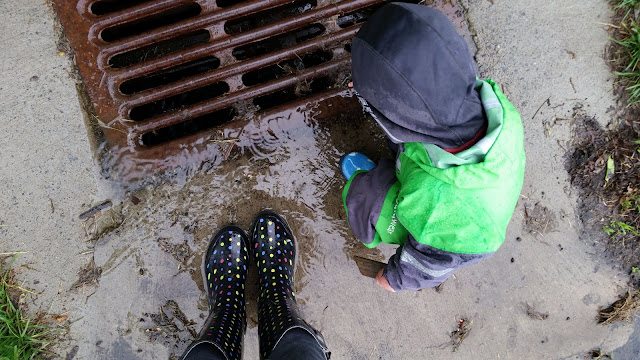 And that pretty much sums up the whole weekend.

We're at the playground, and as usual, we're the only two people there. Sometimes I prefer it this way, so I don't have to participate in awkward interactions with other parents or resent the teenagers who aren't modeling good playground behavior. But sometimes it's nice for my son to have other kids around, especially if they're close to his age. I don't worry about this too much as he attends daycare and spends most of his time with a roomful of other toddlers.

We've been here long enough that he's already done a lot of sliding and swinging and we're now playing with an abandoned basketball when two slightly older kids arrive with their grandma (I think, but I'm horrible at guessing ages, even as an older mom myself). He can't resist the draw of other kids, so he eventually wants to head back up to the playground where he can watch them fly down the big curly slide and run up and down the stairs. He carefully enters their orbit and repeats an occasional word or two. They don't speak English and are amused at his attempts to mimic them, but not in a cruel way.

After a while the younger boy climbs up on the bench and tries to open and insert a straw into a milk box, with limited success. While he's intent on this operation, my son climbs up onto the bench next to him, so I give him his water. The grandma comes over to help with the milk box, followed by the older sister, at which point the kids dig into a ziplock bag of Oreos. There is a brief exchange between the girl and her grandma before the girl offers my son a cookie. He is thrilled and happily sets aside his container of Cheerios. He holds the cookie up and says, "Cookie! Yummy" over and over. He watches the other kids eat and drink while clutching his cookie. I am simultaneously horrified that he's eating food from random strangers in the park and that it's a double-stuff Oreo, of all things. At least it's a blonde one and not the original chocolate version.

He doesn't seem to know what to do with the cookie though, so I eventually break off one of the cookie sides and give that to him in smaller pieces. He scarfs those down, but doesn't seem overly motivated to eat the other half and I'm not about to encourage him to eat the cream center (the best part!). He continues to clutch the second cookie with the cream center still attached until we're home and his lunch is on the table in front of him. He even manages to keep a hold of it throughout hand-washing. I finally convince him he can set the cookie down on his place mat so he can eat his yogurt. Fortunately, he never bothers to pick it back up and I can toss it in the sink with the other uneaten detritus from his lunch.

I know this story will be of little interest to anyone but me, but I like the idea of capturing these little moments so they don't get lost in the shuffle of growing up. Seeing him climbing up to sit with the other little boy, completely unconcerned about the differences in language and culture. Just three little kids hanging out at the playground, eating Oreos. Pure, simple joy.
Posted by a/k/a Nadine at 12:26 PM 1 comment: 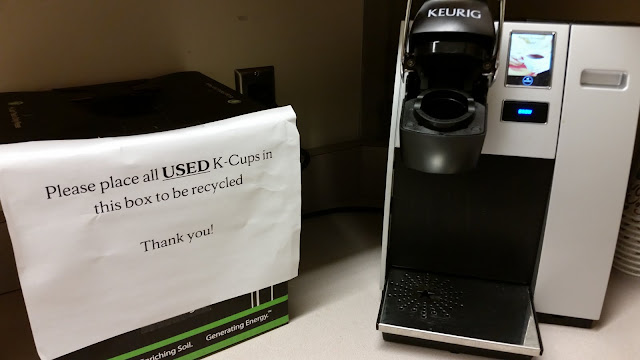 Is this confusing? Hard to understand? Is the print too small? (OK, so yes, I would have made the font larger if I'd printed the sign, but it is still perfectly legible.)

I've picked THREE used K-Cups from the trash so far today. I just don't get it.

I also don't understand why the weekly rate at daycare is going up in a few weeks. Apparently there's an annual increase. How charming. But seriously, for the amount we pay, why can't they provide a more filling (and interesting) afternoon snack than Cheerios (or what are most certainly generic Os).

Happy Friday, here's your rate increase! Happy Friday, have fun picking through the trash because your self-absorbed co-workers can't be bothered to follow directions!
Posted by a/k/a Nadine at 11:43 AM 2 comments:

Afternoon on the Bog

After nap yesterday I dragged my son to Second Home Nature Center for a walk around the bog. He wanted to go to the playground, but I was determined to get in some time in a more natural setting. We can go to the playground in our neighborhood any day. He does love the boardwalk, but there were a few trying moments between the car and the boardwalk. Of course, he was equally reluctant to get back in the car when it was time to leave. Toddlers, good grief. 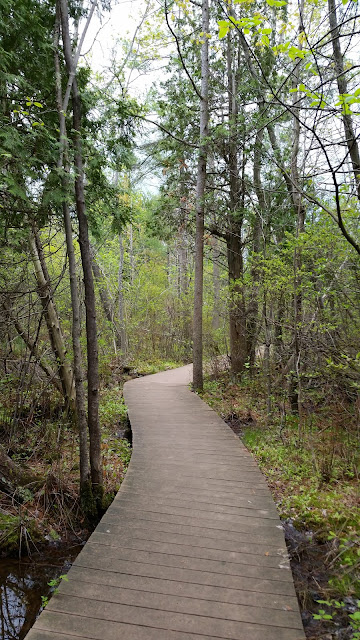 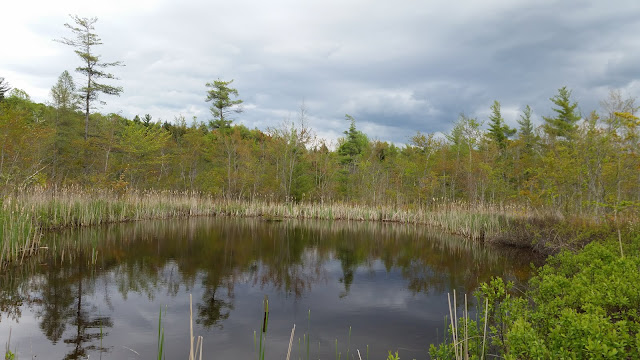 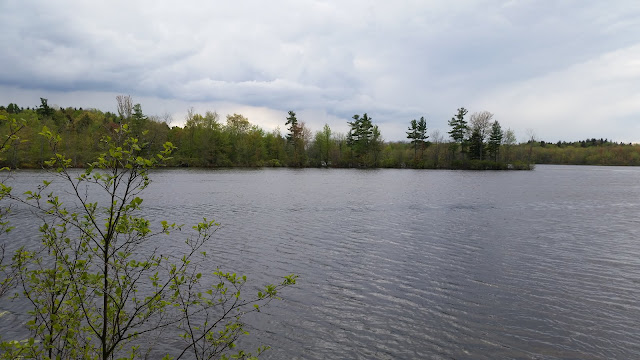 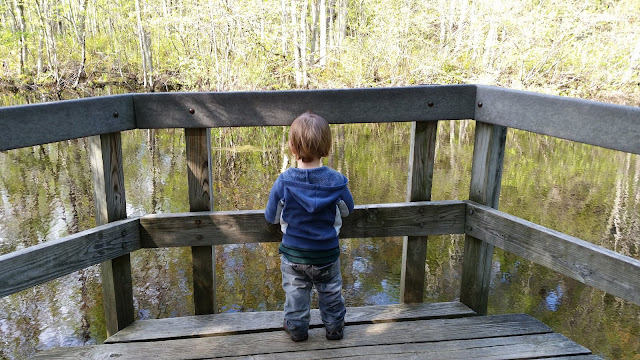 I am almost done with this book and am loving every word. This is one of those books I hate putting down at the end of my lunch. I think about it when I'm not reading it. I don't even remember how I stumbled upon it before adding it to my wishlist, but I am so glad I did. 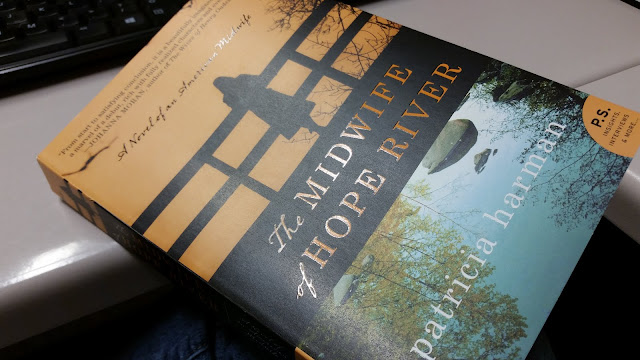 I sacrificed a good portion of naptime on Sunday to once again meal prep my lunches for the week. I cooked another batch of white rice, along with chicken and veggies. I like the combination. This week I chose a different flavor of pre-marinated chicken breasts, which I've managed to forget. Maybe Italian seasoning or something similar. I definitely prefer the honey mustard from last week. I baked it this week, a much superior method to broiling. I also baked the zucchini and yellow squash with olive oil and garlic salt (not enough). I baked it so long that it practically melts in your mouth, just the way I like it. I portioned the food into 4 lunches, which will leave me eating crap only one day this week. Yay! 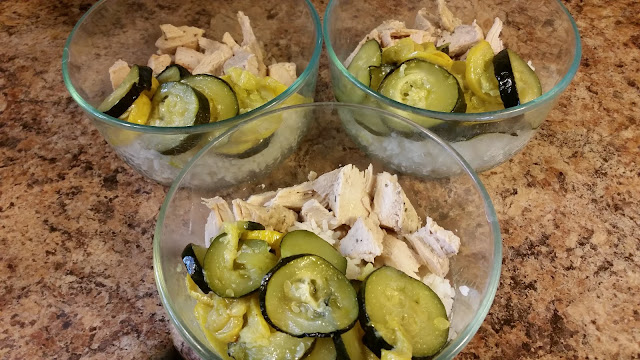 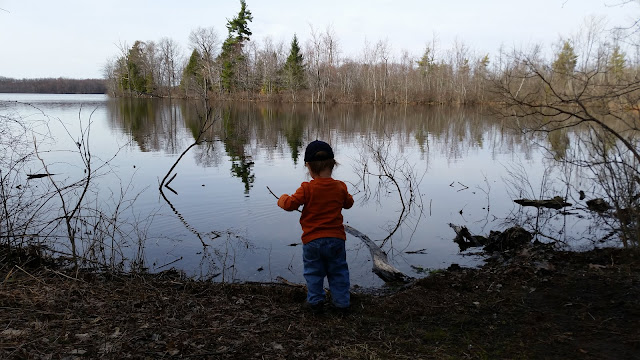 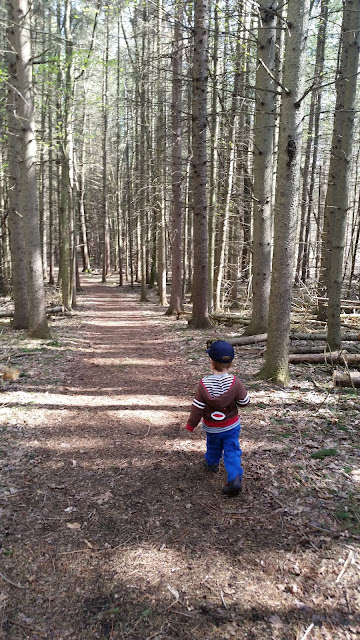 Email ThisBlogThis!Share to TwitterShare to FacebookShare to Pinterest
Labels: Goals

I work with a young woman who is a BIG fan of meal prepping. She puts together lunches for the whole week on Sunday evening. She even has specially purchased plastic containers for the purpose. I've never been willing to sacrifice the amount of time needed to cook and assemble the meals during my son's naps. But I'm also getting so sick of eating crap: processed packaged foods. So the goal is more variety, healthier food (not healthy healthy necessarily but not frozen or freeze dried crap), and hopefully saving a little money.

With that in mind I started small, two marinated chicken breasts, one bundle of fresh asparagus, and white rice (from the cupboard). I broiled the chicken according to the package/internet directions, adding as much as 6-8 additional minutes to avoid any potential RAWNESS. This was the first time I'd ever cooked chicken, so I was a little stressed. Then I baked the asparagus with olive oil and salt, while cooking the white rice on the stovetop.

Now this all may sound very simple, but keep in mind I've never cooked anything more complicated than boiling water for pasta. I ate the first one for lunch today and it was yummy. Success! 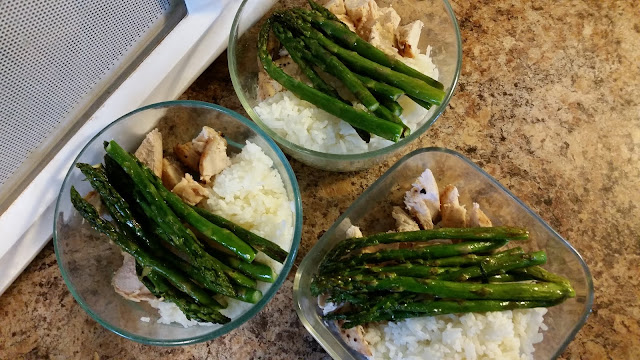