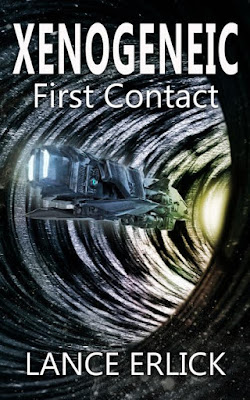 Book Description:
Xenogeneic is a science fiction thriller about first contact with an alien race that lost their civil war and wants to take over Earth.
Dr. Elena Pyetrov’s father vanished in space 18 years ago while searching for extraterrestrial life. As an aerospace engineer, Elena travels into space to search for answers and continue his work. Her ship is pulled off course and crashes. She suspects extraterrestrial interference.
The alien Knoonk lost their civil war in a distant star system and fled to Earth’s neighborhood to hide and regroup. They seek a new home—Earth. Unable to live in Earth’s toxic environment, the aliens kidnap and use humans to genetically modify their species to adapt.
Surviving the crash, Elena and her shipmates are transported to a closed cave system where the Knoonk monitor and control everything. Elena tries to make a connection with her hosts and find ways to work together, but Knoonk leaders rebuff her and force the humans to submit as slaves. The aliens use illusions, distractions, and social experiments to learn from their hostages and keep them off balance. Resistance by captive humans brings swift punishment to break the human spirit.
​
While Elena continues to look for ways to cooperate with the Knoonk, it becomes apparent that there can be no compromise. The Knoonk want to capture Earth for their species. It is winner take all. With time running out, Elena must dig deep to uncover the alien plan and find a way to stop them before the human race faces enslavement and extinction.
Buy the Book:  Amazon  ~  Add to Goodreads
Author's Bio:

Lance Erlick writes science fiction thrillers for young adult and adult readers. He is the author of The Rebel Within, The Rebel Trap, and Rebels Divided, three books in the Rebel series. In those stories, he explores the consequences of Annabelle Scott following her conscience. He authored the Regina Shen series--Resilience, Vigilance, Defiance, and Endurance. This series takes place after abrupt climate change leads to the Great Collapse and a new society under the World Federation. His latest novel is Xenogeneic: First Contactabout encounters with an alien race aiming to take over Earth.
Connect with the Author:  Website  ~  Twitter  ~  Facebook  ~  Pinterest

It's been a long time since I've read any science fiction, so I was really excited to get my hands on this book and it captured my attention from page one. Xenogeneic: First Contact by Lance Erlick is fast-paced and action-packed. It is a non-stop whirlwind and packed full of surprises right to the end.

That said, the characters are not well-developed. It's hard to become invested in a story when you don't feel like you really know anyone involved. There are also so many characters with fairly minor roles that it is difficult to keep everyone straight. The story is oddly jumpy at times, lacking smooth transitions. There is a lot of fighting in the book, although it is not particularly graphic. Nor is there graphic sexual content, with violence being mostly implied.

In short, while interesting, it was not compelling enough for me to seek out other books by this author. I have read better reviews of some of his previous efforts though.

To read more reviews, please visit Lance Erlick's page on iRead Book Tours.Disclosure: I received a free copy of this book in exchange for writing this review. The opinions are entirely my own. 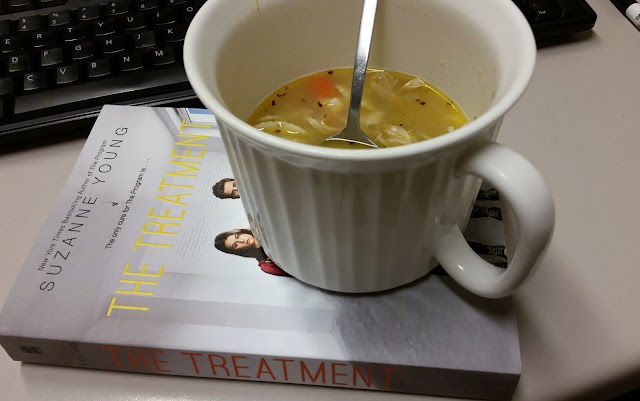 I finished this book on my lunch yesterday. It was the last in this series, so I'm sad to not have more to read. I read them out of order, but it didn't end up mattering too much.

I will start a new book tomorrow, as I used my lunch hour today to attend a free yoga class offered by my employer. I enjoyed it a great deal, as always. Then I came back to the office to find it filled with nasty cleaning fumes. The doorstop won't work, so I have no way to even try to circulate air. So there goes my happy, peaceful yoga mood. I hate people.
Posted by a/k/a Nadine at 1:32 PM 2 comments:

Earlier this week we got hit by Winter Storm Stella. She dumped about two feet of snow on us over two days, during which time the institution I work for shut down. Snow days! Yay! Unfortunately I had a doozy of a head cold, so I wasn't able to enjoy my days off as much as I might have otherwise.

On the second day I did something I haven't done in possibly years. I rented a movie and spent the entire naptime on the couch under a blanket. The first movie I tried to rent was only available to buy (no thanks) and the second one is currently showing on a channel I have, so I set the DVR to record it for free instead of paying to rent it. That left me surfing the recent releases until I happened upon Inferno with Tom Hanks. I have read all of Dan Brown's books and seen all of the previous movies. I can say with confidence something I don't know if I've ever said before: the movie was better than the book. Shocking, I know. But wow, did the book just drag on and on with all that Dante business. Bo-ring!

Email ThisBlogThis!Share to TwitterShare to FacebookShare to Pinterest
Labels: The Every Day

Drinking: Water or tea. Nothing new there.

Watching: I only watch TV on the weekend while my son sleeps. I usually am able to keep up with most of my regular shows: General Hospital and Chicago Fire, PD, and Med. The other lower priority shows tend to accumulate until I have extra time off: Blacklist and Modern Family.

Reading: A book that I will be reviewing in a few weeks. And to be completely honest, if I had not agreed to review the book I would have abandoned it days ago. Bet you can't wait to read the review now after that teaser! Ha.

Listening: I don't listen to much music. At home I sometimes will put the classic rock station on the TV. In the car I listen primarily to a station with "Sunny" in its name. I used to think of this channel as easy-listening. So in other words, I AM OLD.

Playing: Choo-choos. My son is mildly obsessed with his train set. I also occasionally find time for a game or two of Bejeweled Blitz on Facebook.

Laughing at: My son. He's such a goofball sometimes, as is common with almost-2 year olds.

Loving: The milder temps and more daylight. I am so ready for spring!

Hating: Not being able to spend more time with my son. I want to squish him up against me every second of the day. He would not be on board with this plan, even if it was possible.


*I took a load of stuff to the Salvation Army on 2/18/2017 (2 boxes and 1 bag). This is hard to do with a toddler in tow. The previous weekend I loaded the car and planned to go after a trip to Target. Unfortunately, the little man melted down in Target when I wouldn't let him keep a toy school bus (he has the exact same one at home so I was definitely not buying a second one), so I abandoned any hopes of making additional stops. Then I had to unload the car to go grocery shopping and reload the car the next weekend. Having learned my lesson, we went to the Salvation Army first. I unloaded the car and then managed to write out the receipt (for tax purposes) with a giant toddler on my hip. Mission accomplished. It was just a drop in the bucket of what needs to be donated, but it's a start.

**I purchased a 3 pack from Amazon. The 3 pairs I last purchased are getting a bit tight now that I've gained back the 20 or so pounds I'd lost, so I ordered the next size up and of course they're too big. I can still wear both sizes, but neither fit satisfactorily. So I'm not buying any more for now.
Posted by a/k/a Nadine at 10:38 AM 1 comment: