Last month I signed up to participate in the Secret Santa Mug Swap 2017 hosted by San. After seeing how much fun it was last year I couldn't resist. And when my mug arrived from Beth it couldn't have been more perfect. I LOVE this saying and yet, surprisingly enough, I didn't own anything with it. Now I do! Many thanks to my Secret Santa Beth for the mug and to San for organizing our #SecretSantaMugSwap2017! 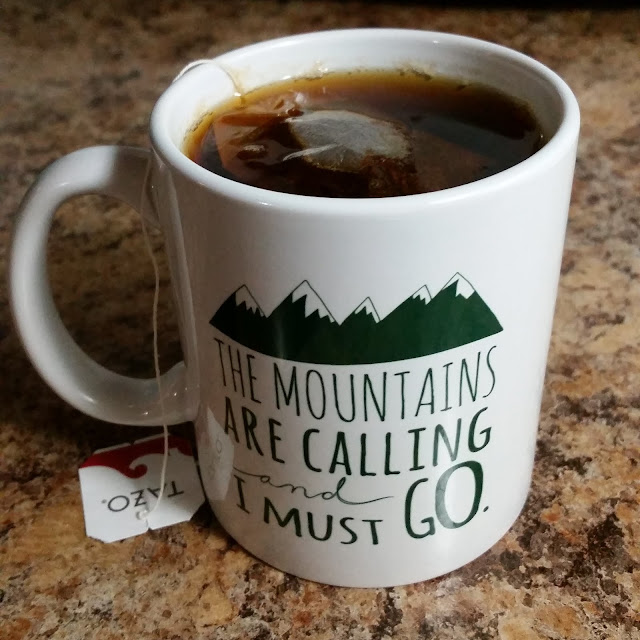 Email ThisBlogThis!Share to TwitterShare to FacebookShare to Pinterest
Labels: Just for fun

Real or Fake Tree? Real, of course. Favorite Christmas cookie? Oreo cookie balls. Fudge.Home or Travel for Christmas? Home and family (local).White or Multi-color lights? White. I wanted to switch to color for the benefit of my son because it seems more FUN, but after spending $40 on the tree, I didn't want to spend any more money on new lights.Christmas cards? Not this year.Favorite gift received and/or given? This is a difficult question because I have a really bad memory, but the first thing that popped into my mind was the snowshoes my dad made for my sister and me. The sinew(?) was bad, so they can't be used, but I love that he MADE them for us. I need to hang them up in my house somewhere.Stockings or No stockings? Yes, a stocking for my son.Christmas pajamas? No. I really wanted to get matching jammies for me and my son this year, but again, I didn't want to spend the money.Favorite Christmas song? I love Christmas music! Almost all of it, except that horrible song about the shoes. Favorite holiday tradition? Traditions are changing and developing with the new kids in the family and the death of our stepmom. So I don't think I have an answer to this.Early shopper or last minute? Both. Online!Favorite Christmas movie? Classic: It's a Wonderful Life. Modern: The Holiday. I love Christmas movies!Favorite holiday beverage? I used to love eggnog (maybe with a dash of amaretto), but I only like the kind with no spices so it just tastes like melted vanilla ice cream. Unfortunately, I don't know what brand my stepmom used to buy. I'm also a big fan of hot chocolate. I would love to try some of Starbucks fancy flavors. The last one I bought from a small coffee shop was horrible though, and bad hot chocolate is the worst.Cookies and milk for Santa? I've never done it before, so I'm not sure.

Email ThisBlogThis!Share to TwitterShare to FacebookShare to Pinterest
Labels: Just for fun 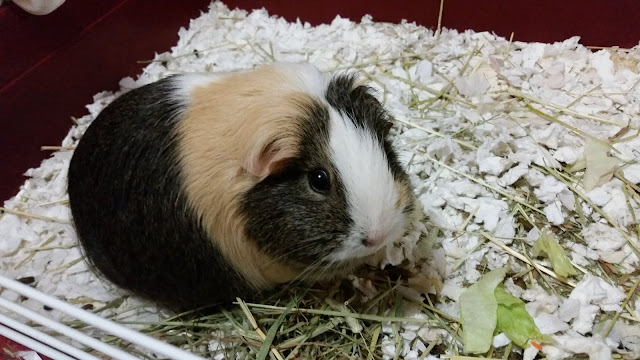 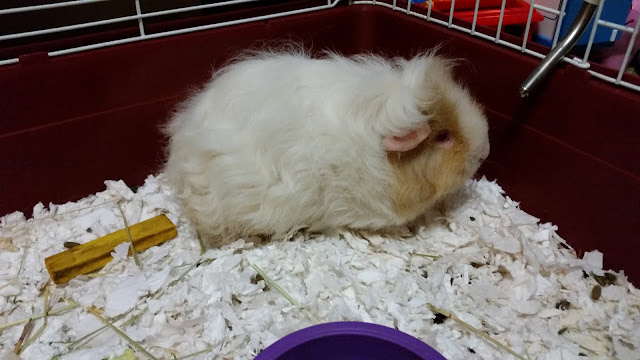 Welcome to the family, Nutmeg and Cinnamon!

The woman I got these guinea pigs from was having surgery yesterday and needed them gone by Sunday and there's NO WAY I could hide them for two weeks, so Christmas came early. My son was ecstatic when he saw them, so it would've been a wonderful moment if I could've pulled it off to have them under the tree on Christmas morning. But alas.

They are a bonded pair of females, mother and daughter. Nutmeg (top photo) is the mom and is much more brave and out-going. Cinnamon is very timid and skittish.

Little Man loves them. He can't wait to see them, talk to them, and feed them. He calls Cinnamon "The Cinnamon," as in "I should say hi to the Cinnamon." Initially he was calling Nutmeg "Nutcracker," but by this morning it had morphed into "Nutmegger." I renamed them, as their previous names were beyond dull.

So that brings us up to one parakeet and two guinea pigs. And that's where we'll be sticking.
Posted by a/k/a Nadine at 11:19 AM 1 comment:

On Saturday morning my sister and I met at Second Home Nature Center for a hike with our boys. We got off to a somewhat rocky start (car sick barfing in the parking lot) and had a few rough patches as is bound to happen with toddlers (and kids in general), but it was still worth the effort of course. I was too chilled (even with polypro top and bottom) to attempt much photography, plus the lighting was not ideal for my old cell phone, so these pics are courtesy of my sister. There was rock and stick throwing, playing in the leaves, and some vigorous stomping of puff balls, in addition to running and rolling around. The boys are rather fond of each other, despite the age difference. 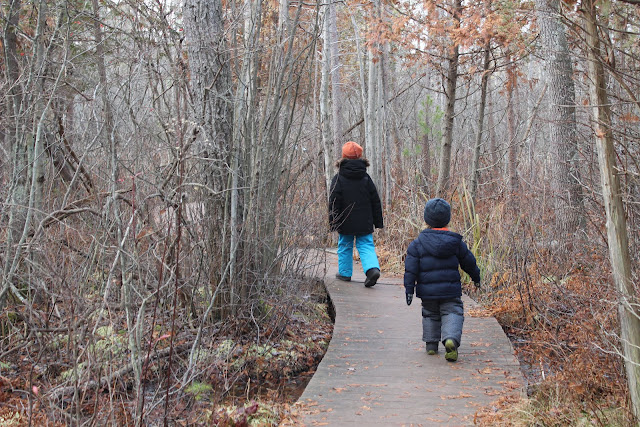 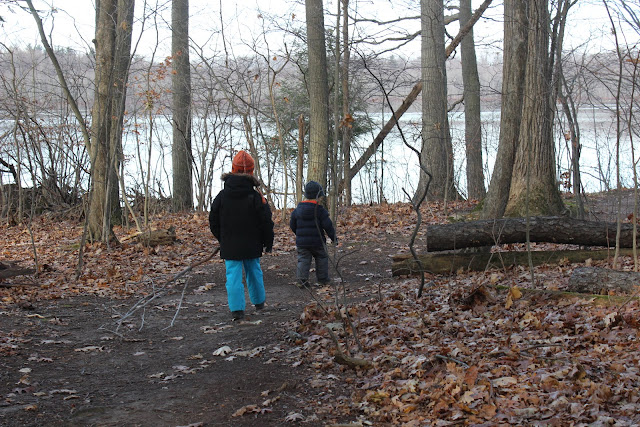 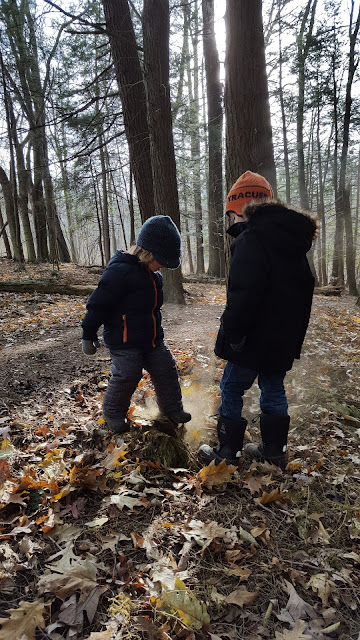 Email ThisBlogThis!Share to TwitterShare to FacebookShare to Pinterest
Labels: Hiking

Saturday morning I enlisted the help of my father (and his pick-up truck) to get and set up our Christmas tree (a Canaan fir). My son was tickled at the new addition to our living room. After he was in bed I put on the lights and garland, and when we came downstairs Sunday morning he was even more excited. Before we did anything else we decorated the tree. He thought the box of ornaments was full of toys and had a blast. He is especially fond of the ornaments that have pictures of him on or in them and has been taking them off and rehanging them multiple times a day. 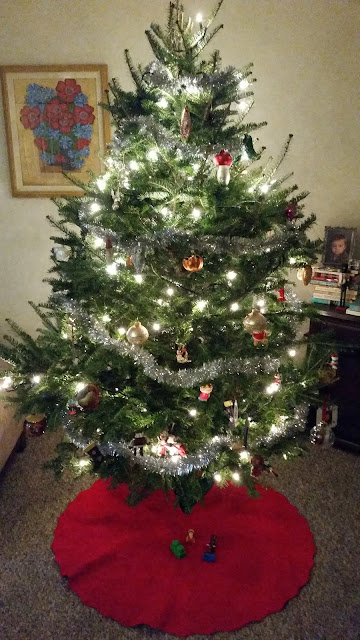 I have a second box of ornaments that I may haul out at some point while he's sleeping to hunt down a few more of my favorites. Or I may leave the tree in its current sparsely decorated state.

Three of the items sitting on the tree skirt are from his Playmobil advent calendar, which has also been a huge hit (thanks Mimi!).
Posted by a/k/a Nadine at 2:27 PM 2 comments:

We visited Second Home Nature Center twice in November. The first visit we stuck to our regular route along the Bog Trail, but on the second visit I took us on another trail. It is longer and lacks the charm of the boardwalk for my son, but there are several opportunities for rock throwing. Plus, I really craved a change in scenery. 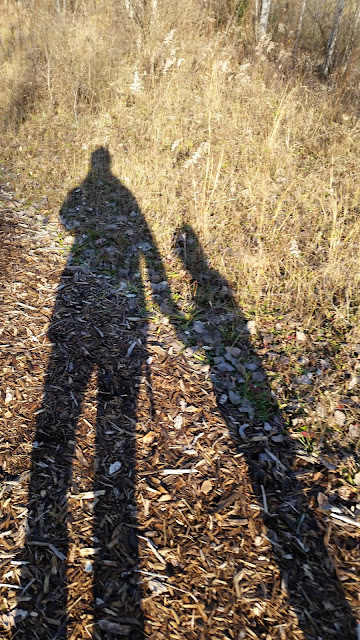 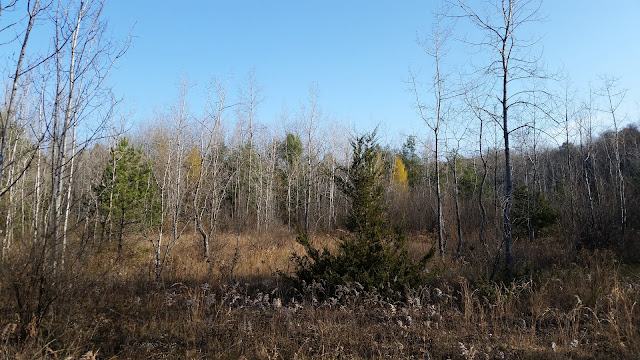 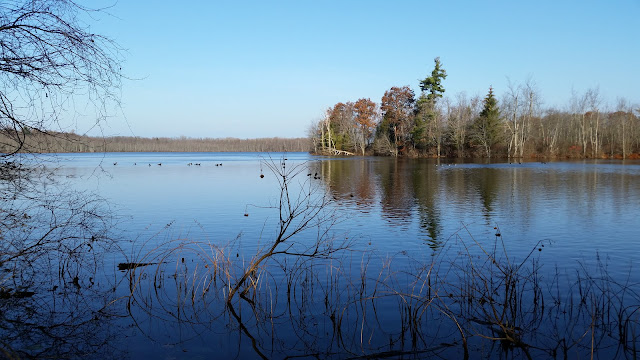