Last night my husband and I went to see our niece in her elementary school play. She is a 5th grader at a school my sister attended (I was bused to another school due to over-crowding).

The play itself was marginally interesting, but I loved seeing the kids (mostly girls) singing and dancing their hearts out. They were so pleased with themselves and had every right to be proud of their hard work.

Naturally it brought me back to the plays I participated in as a kid. In 4th grade I was a skeleton* in The Wizard of Oz and in 5th grade I was a cat in The Pale Pink Dragon. Both were small speaking parts with just one or two lines. I also ran a spotlight and did some set work. It still amuses me to recall how my white skeleton gloves stood out against the dark-colored tree I was holding, showing clearly on the recorded video. Although I never participated in drama productions after 5th grade, I'm glad for the experience of those two plays. I'm also glad that plays haven't been cut because of budget woes, at least in this one school district.

I was flipping through the program before the play started and recognized a head shot of one of the 3rd graders from pictures her aunt posts on Facebook. A quick look around the audience confirmed that my Facebook friend (and my father's former employee) was sitting across the aisle in the same row as us. Further browsing revealed that the daughter of two former high school classmates was also in the cast. Sometimes it really does feel like a small town.


*Obviously they added characters in order to have more kids involved. My skeleton character was the assistant to the Assistant Wicked Witch.
Posted by a/k/a Nadine at 8:15 AM 2 comments:

I've been thinking a lot about fear landscapes lately. If you've read (or watched) Divergent you will understand the significance of this. If you have not, the main idea is that fear landscapes are made up of your worst fears broken into separate and specific scenarios.

Some of mine were easy to identify:

Others took further reflection:
And still others are less serious:
I've probably over-looked some or am altogether unaware of ones that would crop up on their own. What would your fear landscapes look like?
Posted by a/k/a Nadine at 7:38 PM 3 comments:

Email ThisBlogThis!Share to TwitterShare to FacebookShare to Pinterest
Labels: Reflections

Obsessed with... the Divergent Series by Veronica Roth. As in, I can't stop thinking about the books all day (and all night). When I'm not actually reading, all I want to do is be reading. At this moment, I'm just over halfway through the second book, Insurgent. I'm struggling with my desire to read the books as quickly as possible (because I love them so much, obviously) while also wanting them to last as long as possible. I'm not really excited about life after Divergent. Fortunately, on a related subject...

Looking forward to... the Divergent movie! Bet you saw that coming a mile away. I saw the movie trailer before I started the books (it was the kick in the pants I needed to start reading the series) and mistakenly thought the actor that plays Eric was playing Four, so I read the whole first book picturing the wrong person in my head. I realized my mistake after I saw the actor who actually plays Four on the Today Show and have been fighting my own stupid brain ever since. It makes me wonder what I would've pictured if I hadn't had any preconceived notions about what he looked like (the actor that plays Eric is the only one that stuck in my mind after I saw the trailer because I'd recently seen him in two other movies). Anyway, I'm not going to do anything crazy like go to a midnight showing or buy advance sale tickets. In fact, I may wait to go see the movie until the crowds die down a little. I am not a fan of packed movie theaters and people invading my personal space. And don't get me started on the food-related sounds.

Trying not to... stress over money. I know, it's hardly an original concern. Who the heck isn't stressed over money? Enough about that.

Feeling thankful that... people share their books with me. My mom recently mailed me two of her books to read and my sister selected a whole bagful of books from her shelves to lend me (including, you guessed it, the Divergent Series).

Loving... the sound of the solar heat running. It instantly makes me feel happy, warm, and content. Almost free heat! Yay! I love being toasty, but I don't like paying any more than is necessary, so I am very rarely as warm as I'd like to be during the winter months. Today the sun was out in full force and the house got up to 72 degrees briefly. Delightful, just delightful.
Posted by a/k/a Nadine at 5:55 PM 1 comment: 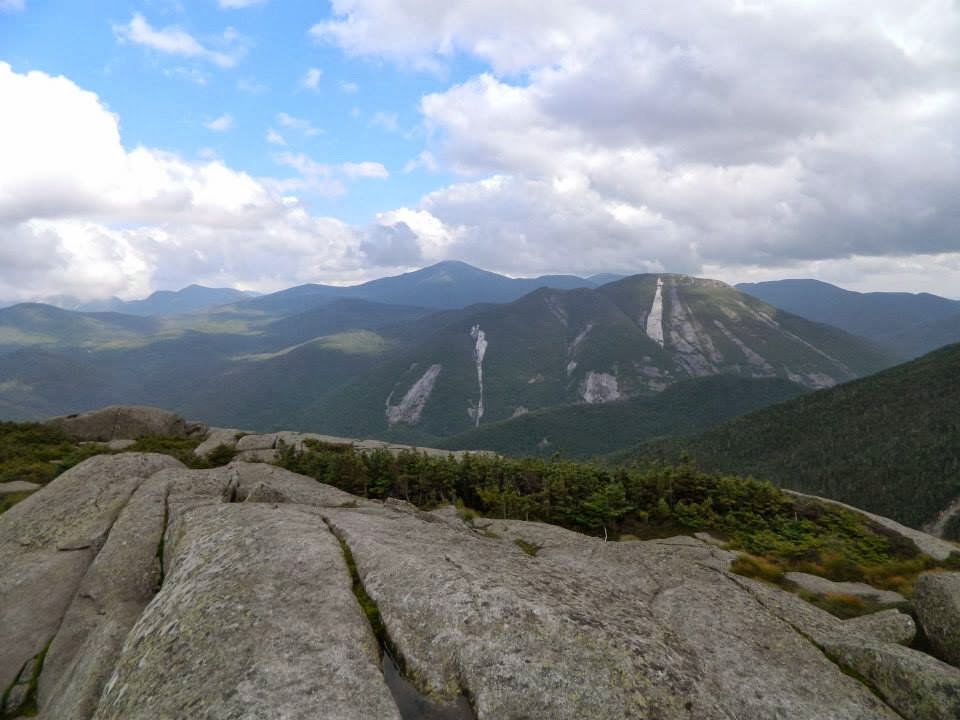 If I could do anything I wanted without worrying about anything at all (bills, responsibilities, etc.)...

I would travel. First I would go to Italy: to Rome and Tuscany and Sicily. I would take thousands of pictures and eat all the food and walk until my feet hurt and then just keep walking. I'd drink the wine and give my fledgling Italian language skills a whirl. I'd soak it all in and when I could finally tear myself away I'd go to Paris and Provence and Scotland and Ireland and Greece.

I would hike. First I would hike my beloved Adirondack High Peaks. Nothing in the world feels better than standing on a summit knowing my body carried me up there all by itself. And nothing makes me feel stronger than seeing my car in the parking lot after 15 miles and knowing I did it again. That even after my body tired from the exertion, my mental strength kept me going. Nothing makes me feel more alive than the narrow trails through green trees and thick moss, ice cold streams, and rocky scrambles. After joining the ranks of the ADK 46ers, I'd travel the US, visiting and hiking in the National Parks. Then I would come home to NY and hike my mountains all over again.

I would have babies and chickens and a big vegetable garden and read all the books. I would eat as much dessert as I wanted every day.

Thanks to Love Court for the inspiration for this post. What would you do if you could do anything, no strings attached? #ifnothing
Posted by a/k/a Nadine at 10:38 AM 4 comments:

Email ThisBlogThis!Share to TwitterShare to FacebookShare to Pinterest
Labels: Reflections

On Saturday my sister and I took her son for his first visit to the sugarbush at the local nature center. We wore our snowshoes and moved through the 6 stations at a pace perhaps not ideal for a 3 year old but one dictated by the older volunteers providing the interpretive programming. He did wonderfully, both with the snowshoes and with the slow pace. He even correctly identified the real maple syrup in the taste test at the end and was also quite taken with the maple candy. Of course. 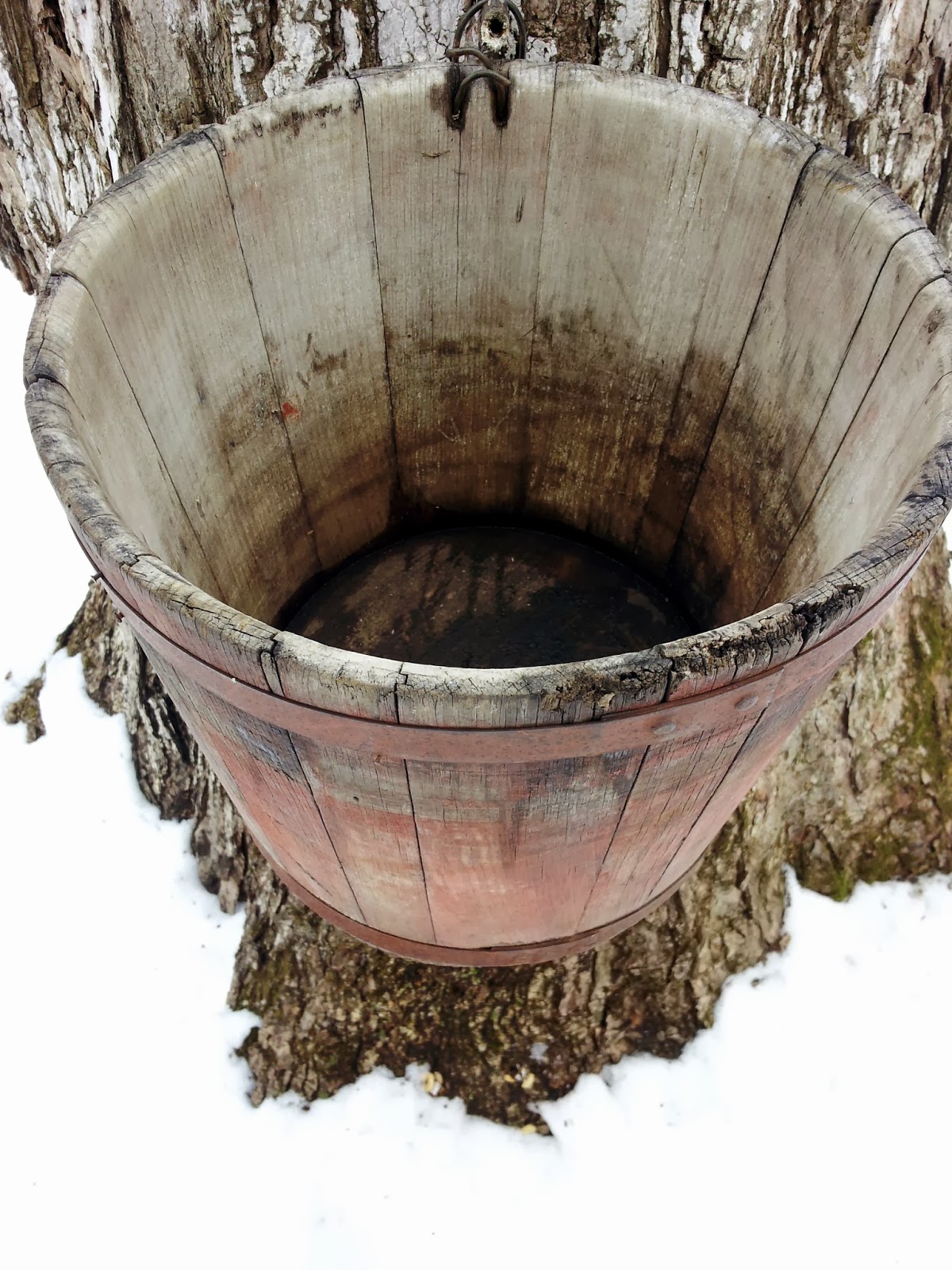 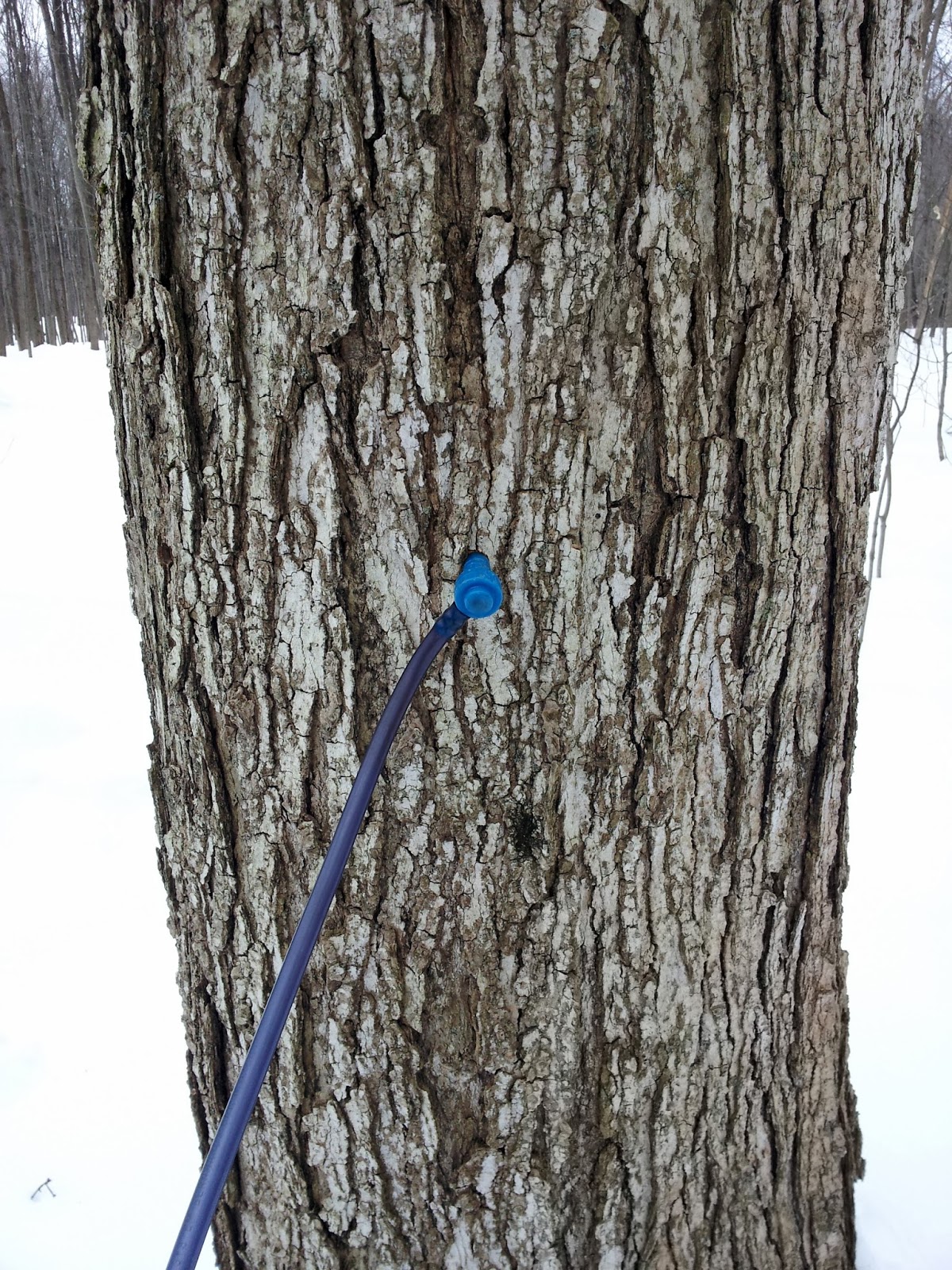 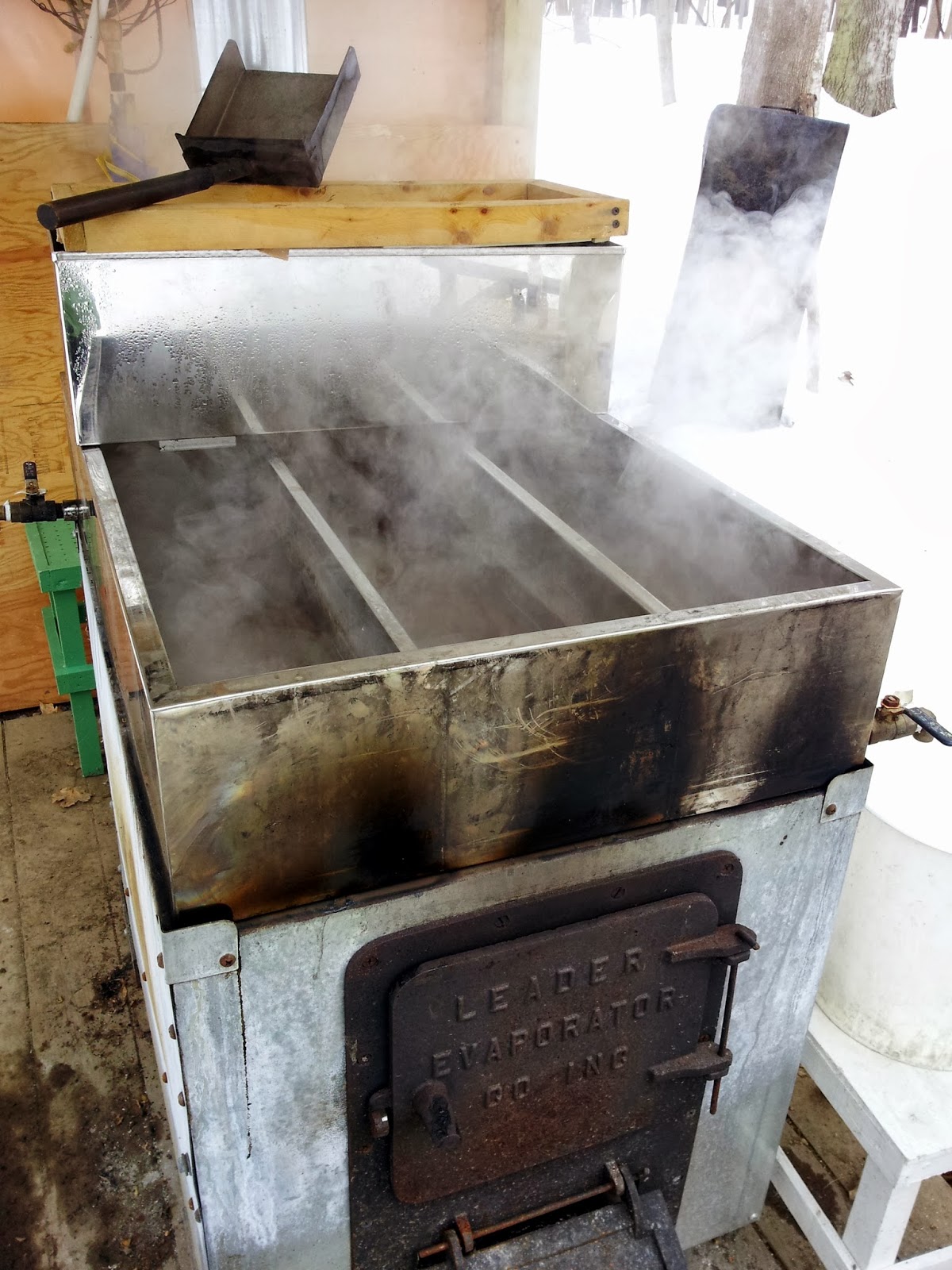 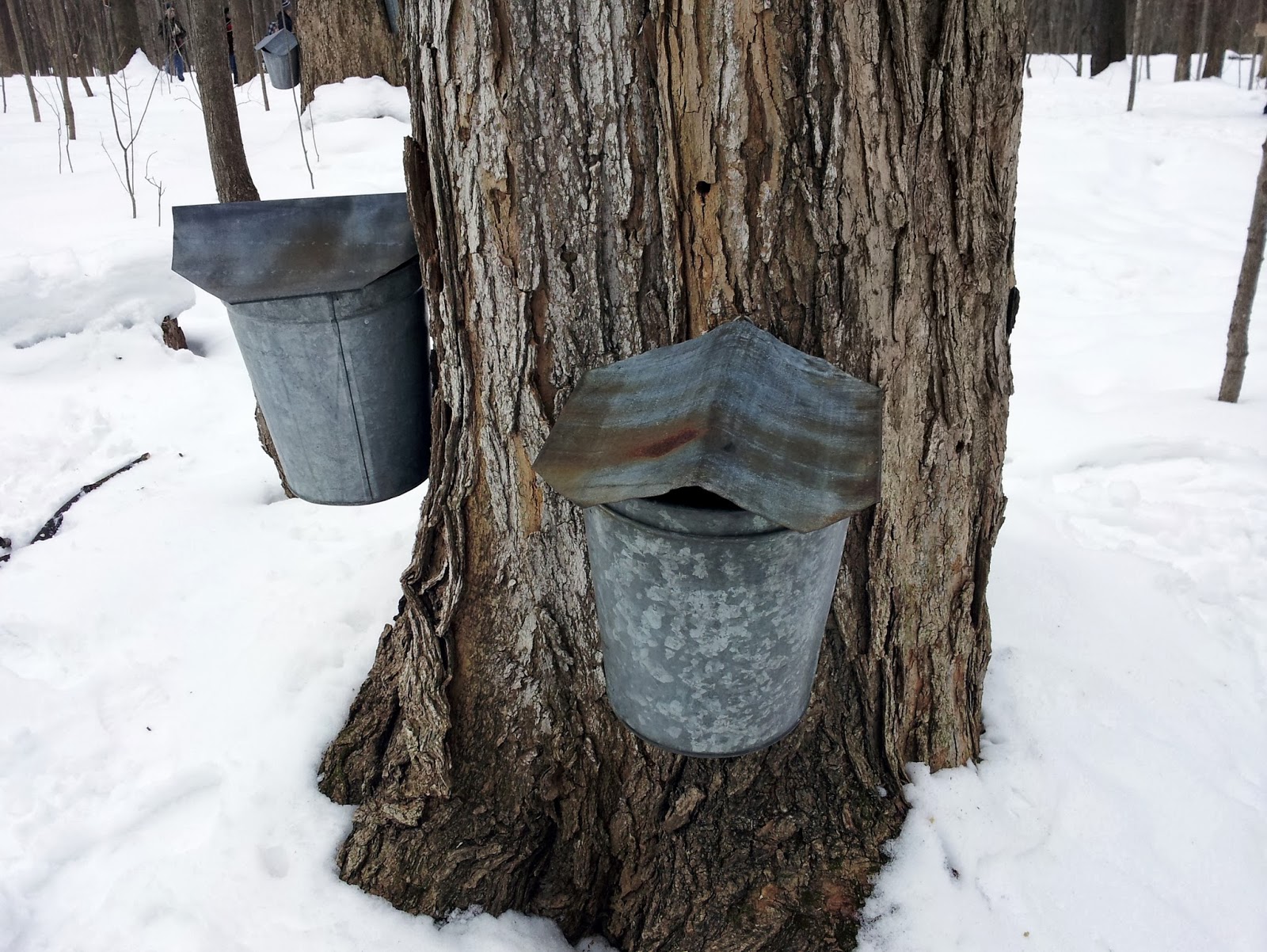 Yes, this post is a bit belated. I've been busy at work, blah, blah, blah. But before the next weekend is upon us, a look back at the last one... 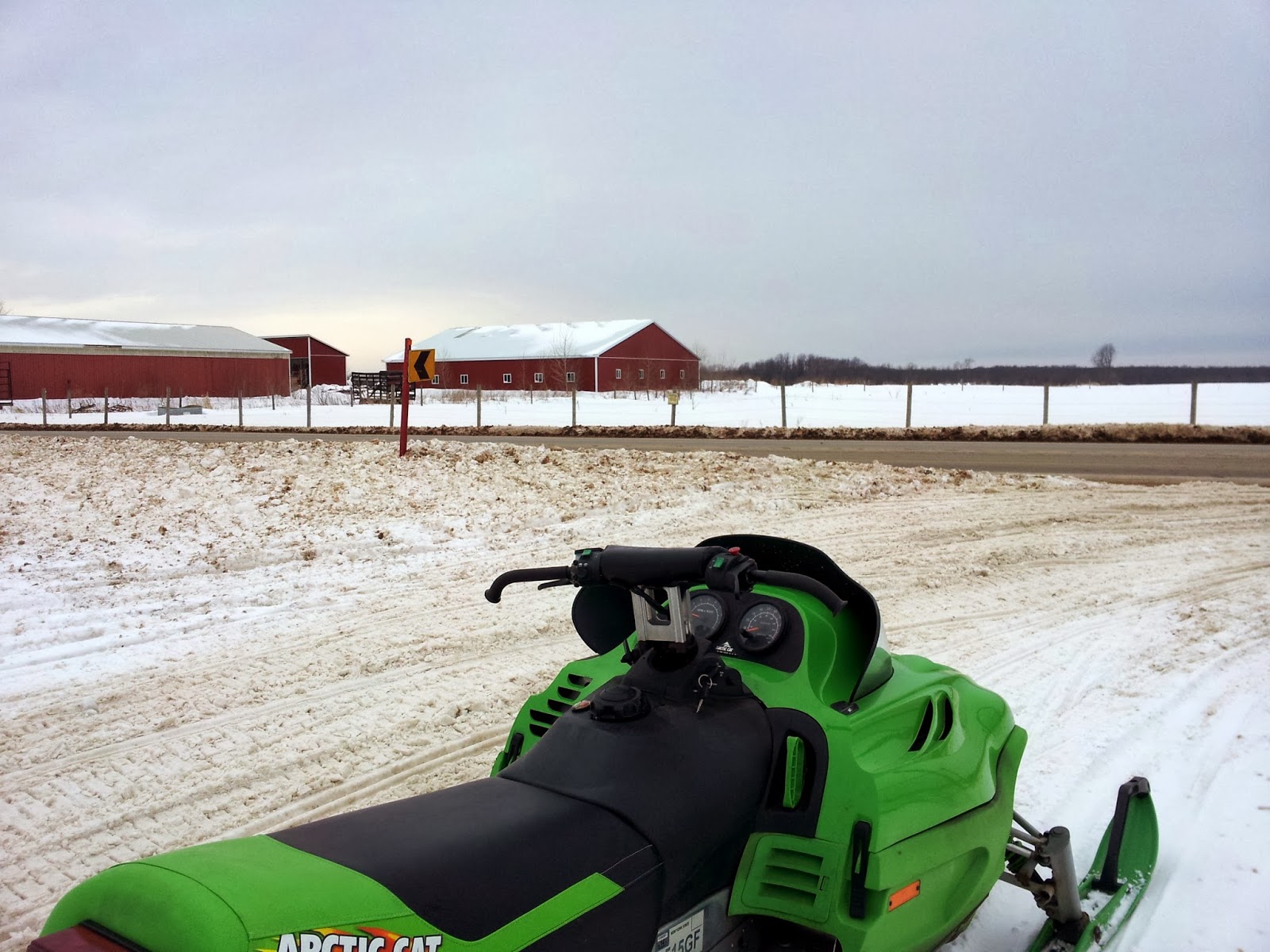 On Saturday afternoon we took the sled out for a spin on a trail closer to our house. The funny thing being that even though we hopped on the trail less than 3 miles from our house, it headed immediately into unknown (to me) territory. Whereas the trail we rode last time was much further from home but in an area I am quite familiar with due to frequent walks. While it was fun to explore a new trail system, I preferred the trail conditions on the last trail and the added pleasure of seeing a well-known route from a much different perspective. We saw a groomer out smoothing the trail, which was cool to see in action. In my pre-snowmobiling life, I was unaware that the trails were groomed in any fashion (not that I'd ever given it any thought at all). Even after only two rides, I can appreciate the value in a smoothly groomed trail. 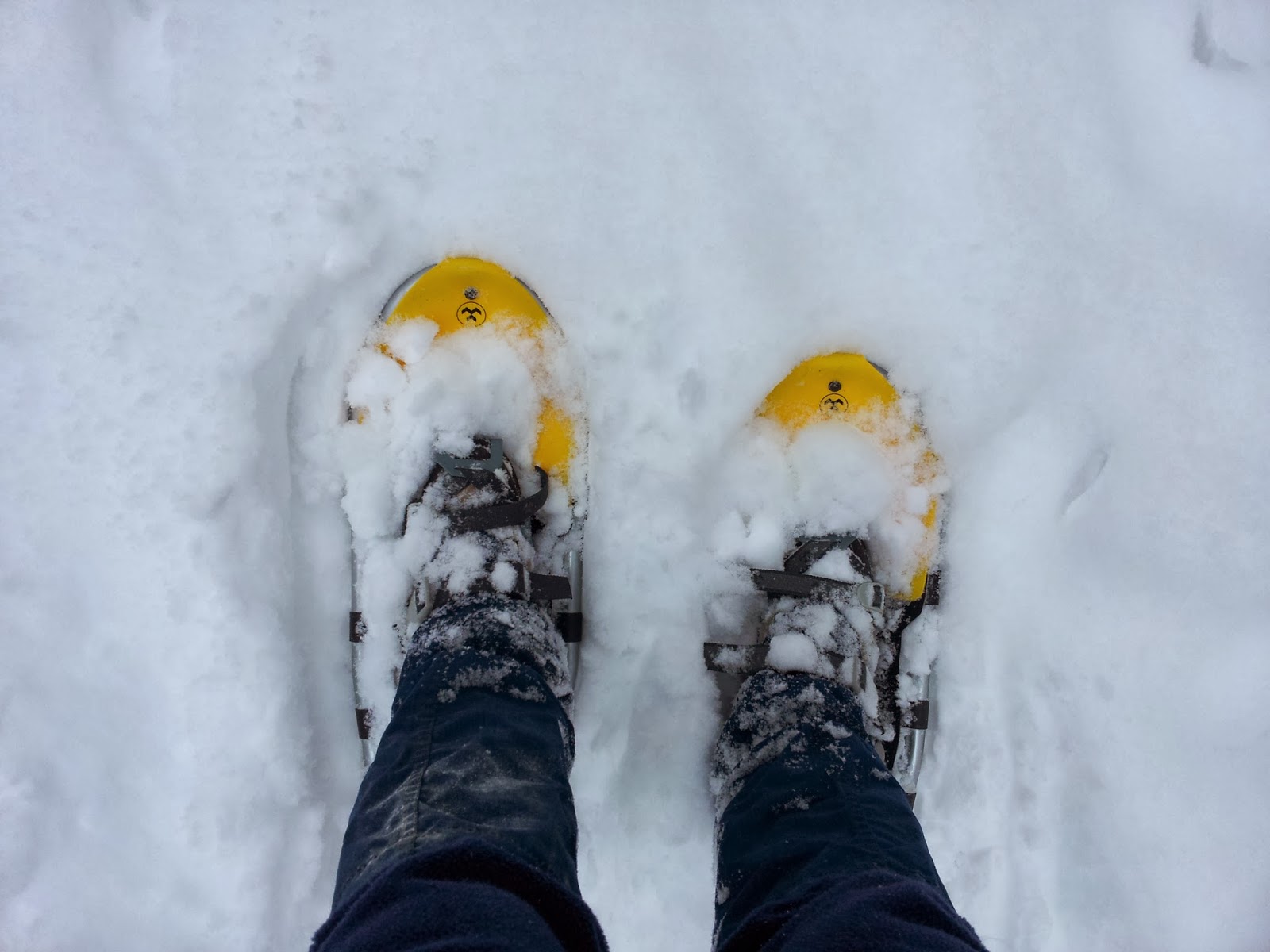 On Sunday we went snowshoeing, but, much to my disappointment, we had to cut our hike short because my husband experienced excruciating back spasms after only a few minutes out. We had hiked down a long hill towards the river but turned back just shy of the river's edge, at which point he removed his snowshoes, deciding they were to blame for the back pain, and we headed back to the car at a slow pace. Unfortunately, his back is still causing him issues and I have sworn off suggesting snowshoeing as an activity for the two of us.

In addition, there were the usual meals out and grocery shopping. And since this post was so late in being written, I am already looking ahead to this coming weekend...
Posted by a/k/a Nadine at 10:09 AM 1 comment:

Email ThisBlogThis!Share to TwitterShare to FacebookShare to Pinterest
Labels: View from the back, Weekending

In the Kitchen Recently

I've never been a fan of cooking, mainly because I don't care at all about savory types of food. All I care about is sweets and desserts. Really. If I could get away with eating only dessert foods I would happily abandon everything else, except for french fries. And cheese. And maybe bread. Um, where was I?

Anyway. I do like to bake though. Because I can eat bits of the batter or dough as I go along. And if I'm doing the baking I can lick the whole bowl all by myself. I don't typically hold grudges, but if you're baking and I ask for the bowl and you intentionally put it in the sink to soak so I can't have it, well, I won't forget that. No sir, that's just low.

After the whole stomach bug from hell thing, I had a couple of bananas festering past the point of edibility, so I decided I had better make some banana bread. I used BerryBird's basic banana bread recipe and it came out great. My husband suggested after the baking was done that chocolate chips would've made a good addition. I don't agree AT ALL, and so I happily ate the entire loaf myself (over five or more days, don't go freaking out). 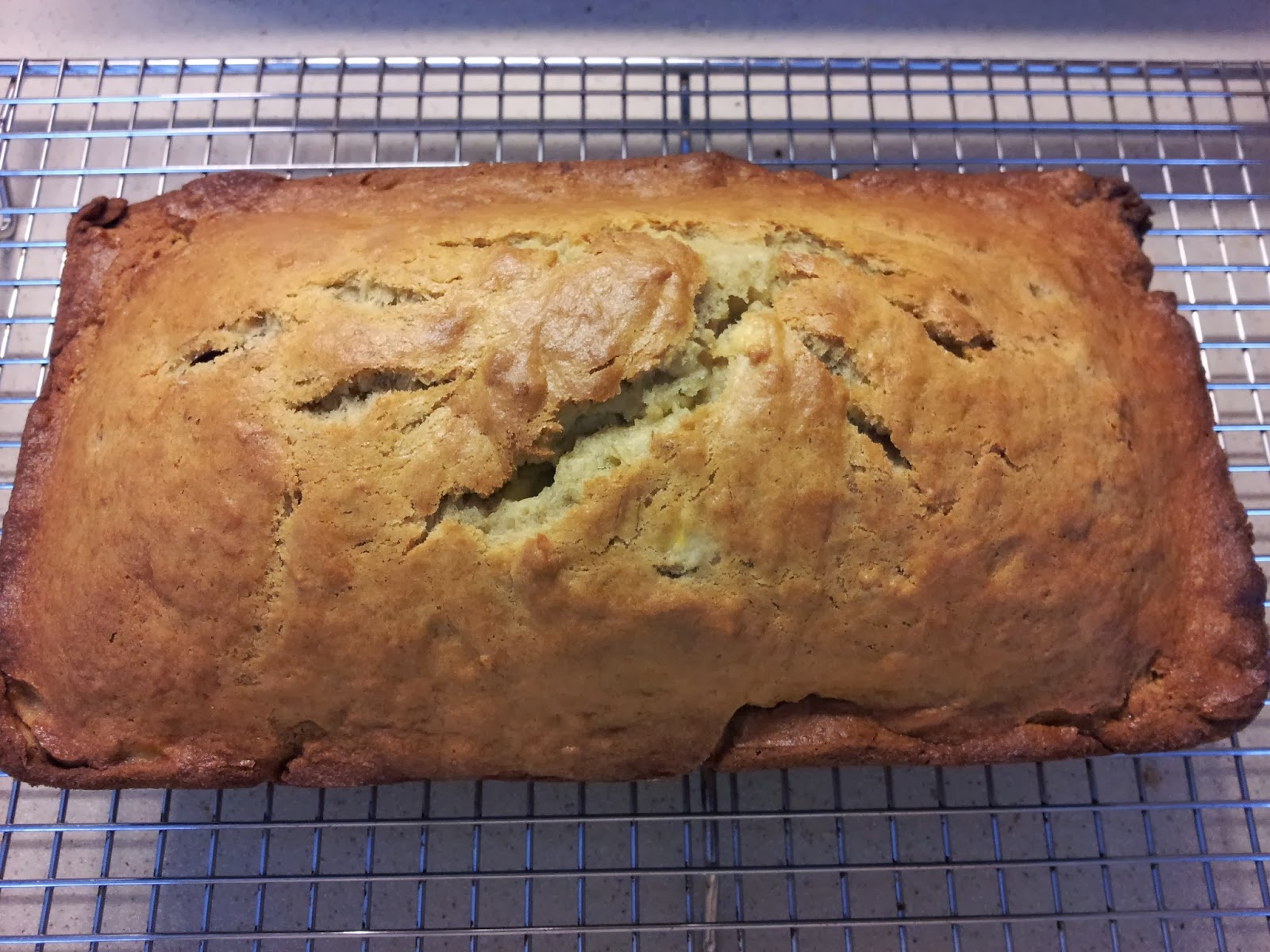 Next I decided it was time to give the chia pudding another go. Last time it came out too runny, so this time I greatly reduced the ratio of milk to seeds and viola, perfection! I also made a smaller batch, which amounted to two servings for me. Naturally I didn't write down the ratio I used so I'll be winging it again the next time I make it. Oops. 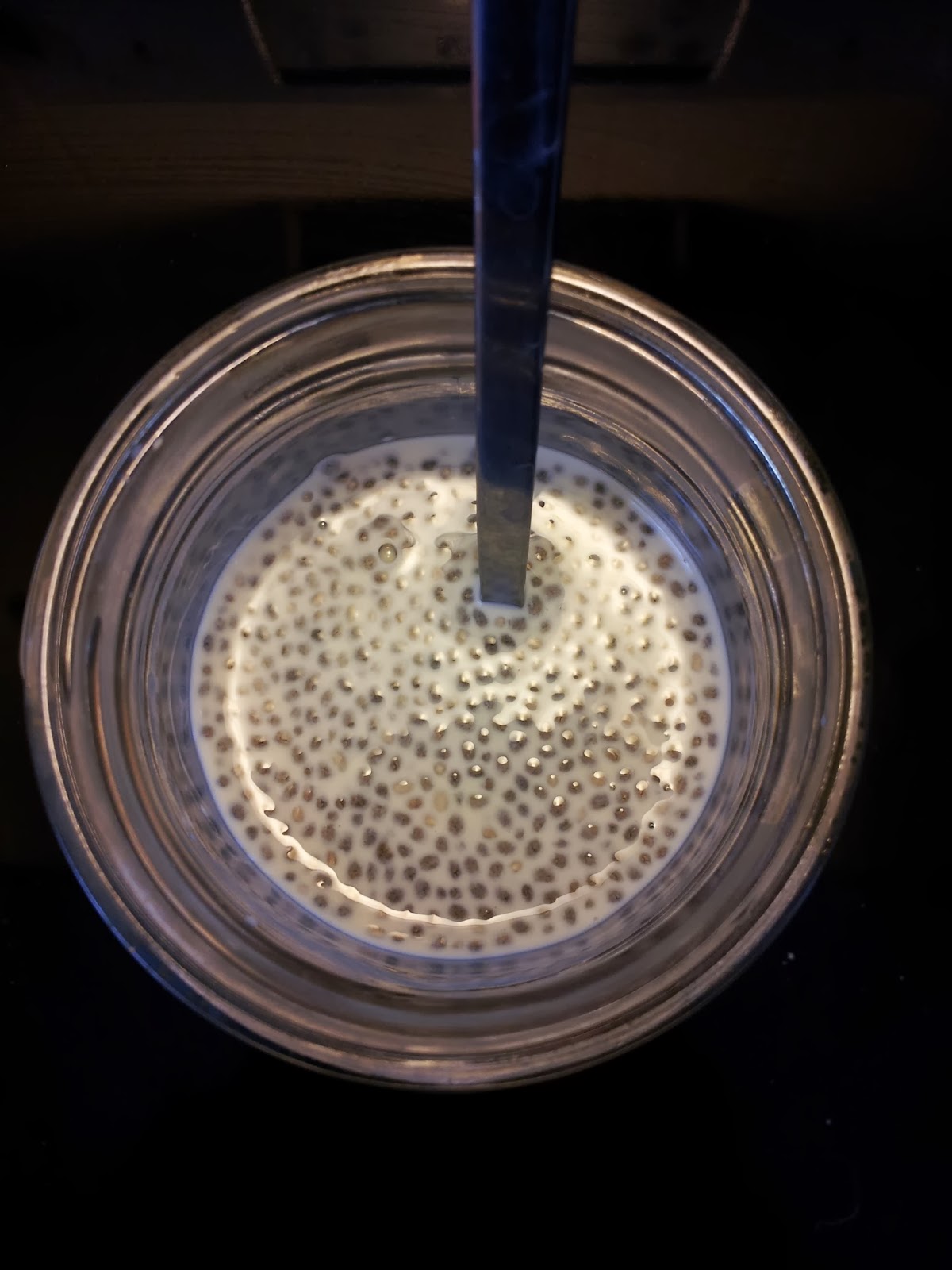 Yesterday I got the hankering to make some oatmeal chocolate chip cookies. I always cut the recipe in half because I like the cookies best when they are fresh. The recipe I use results in about 20 cookies, depending on how much of the dough I eat during the baking process. I was concerned because the oatmeal I have is more than 50% dust, but the cookies came out great. In fact, they are fluffier than usual. Which is good because I can't use the oatmeal for making regular oatmeal because there is so few actual whole oats in the container. That means more cookies have to be made so the oatmeal doesn't go to waste! Obviously. 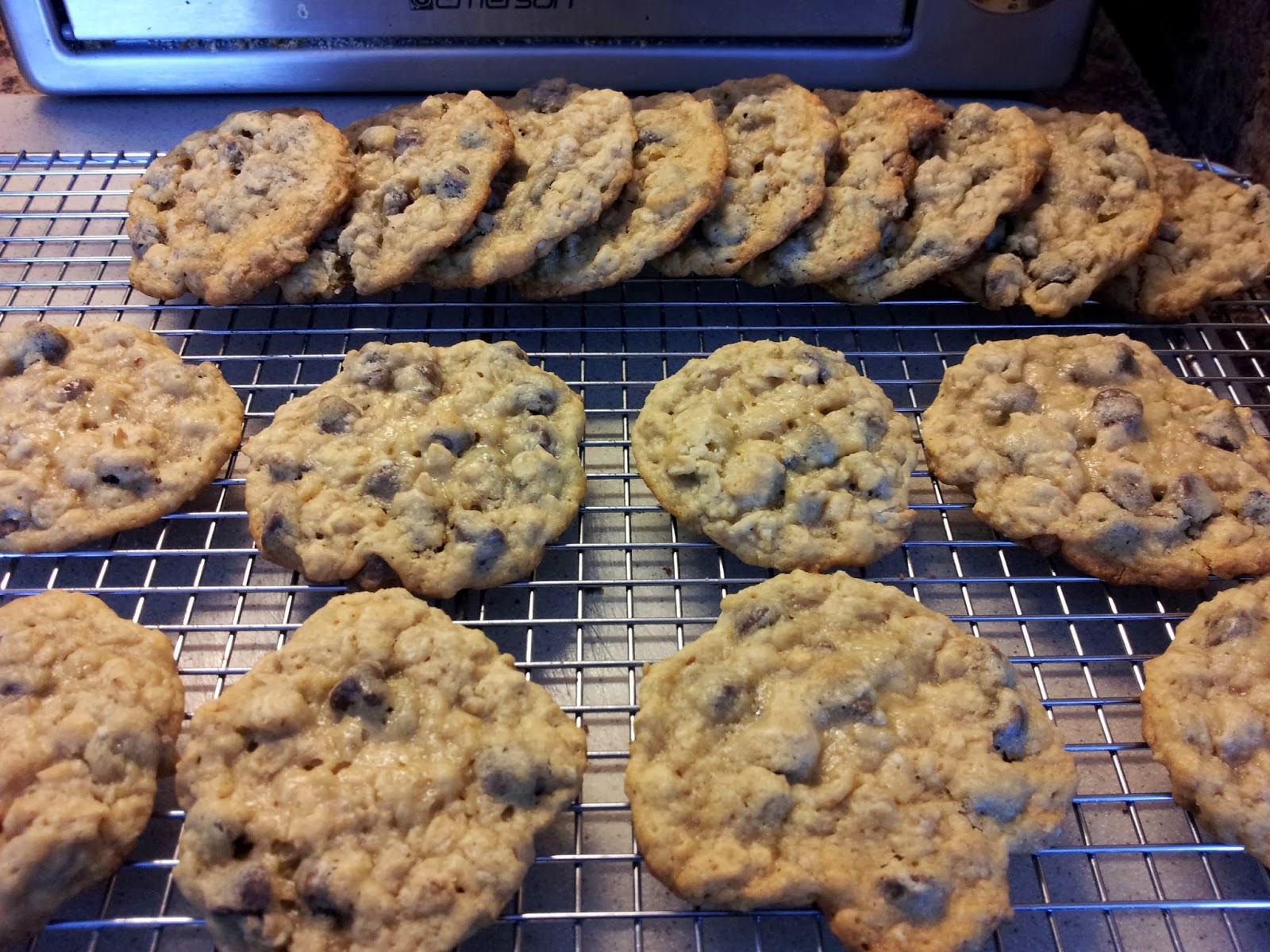