Last year for Halloween I got my Little Man four little stuffed guys at the grocery store. He remains fairly uninterested in them, although he has developed attachments to other stuffed animals in the last year. I wanted to get him something for Halloween again this year, so I decided to go with plastic cups instead. I was just going to get one, because really, how many Halloween cups does one child need, but I couldn't resist the other two once they went clearance. So the tradition of Halloween goodies continues... who knows what next year will bring. 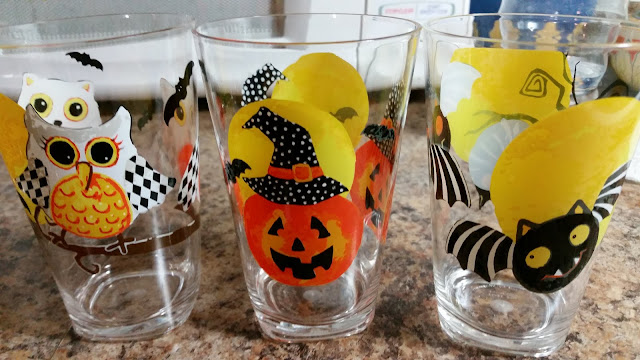 Saturday morning started with another batch of apple crisp because we're still drowning in apples. The funny thing is that the apples are mostly irrelevant when it comes to apple crisp, for me anyway. I double the recipe for the crisp, but include the apples because it wouldn't be socially acceptable to make "crisp crisp."

When the apple crisp came out of the oven, we headed to Second Home Nature Center. I was feeling a strong need to be outside in a natural setting. However, the whole time we were there it sounded like we were parked on a highway. I don't recall the road sounds being so over-whelming in the past. I wonder if it was the lack of wind and less leaves on the trees. Whatever it was, I had trouble shaking my irritation. Aside from that it was beautiful, of course. 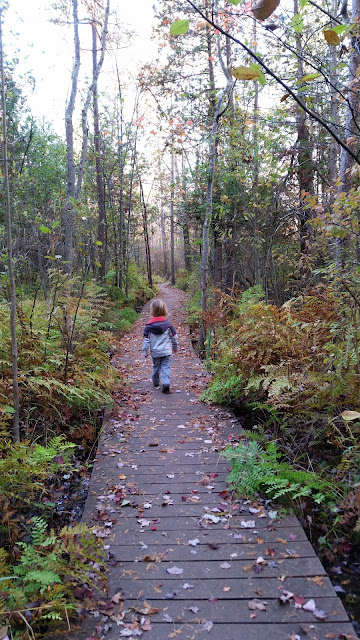 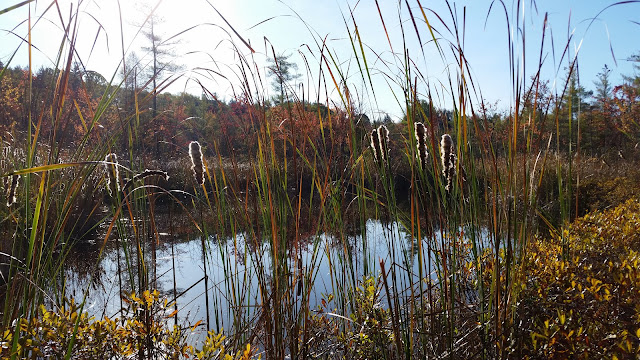 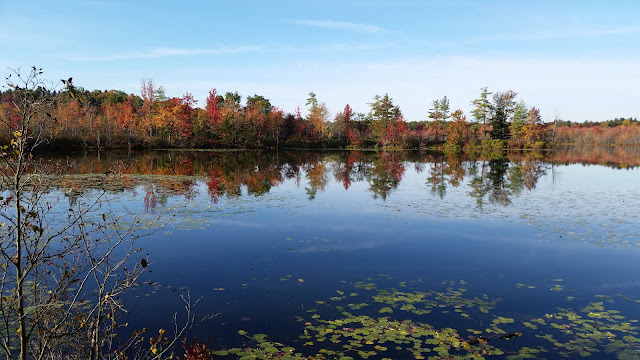 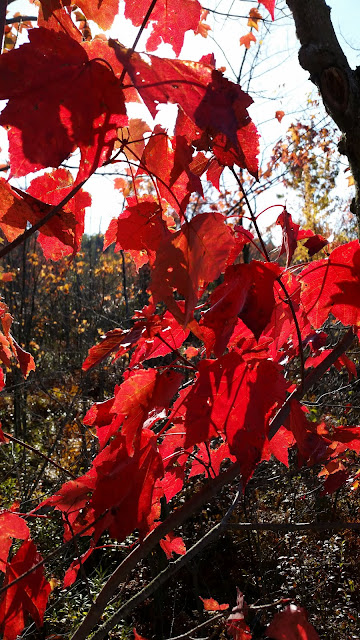 We hit Target before dinner to get more chalk because the Little Man is OBSESSED. He actually used every last little nub that we had, but it turns out mid-October is not chalk season. I had multiple employees helping me search, but they finally found a box of huge fancy chalk that boasts being washable. Um, isn't all chalk water soluble? It has always washed off the driveway in the rain. Weird. Regardless, he's thrilled. 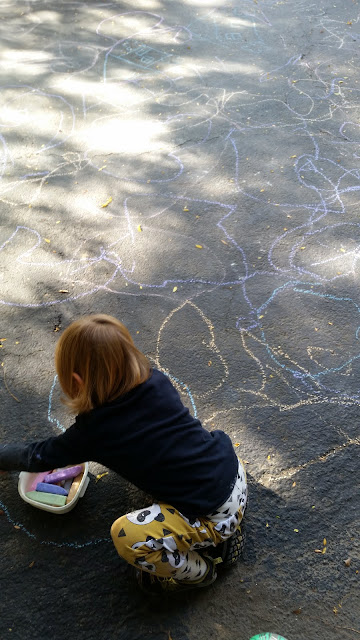 From there we went to Panera for dinner because I had a gift card I was eager to use. We NEVER eat out, so this was a special treat. It felt downright festive, like Christmas. Little Man sat on the bench seat with me, ate all his food, and drank water from a regular cup. We watched a baby at a nearby table and danced in our seats to whatever music they were playing (nothing I recognized).

Sunday morning we put together and decorated a pretty Halloween house ("haunted" seems unnecessary at this point). He had soooo much fun sticking the jelly beans and candies in the frosting. I think that inspired him to ask me to draw houses with the chalk when we went outside. Lots and lots of houses. 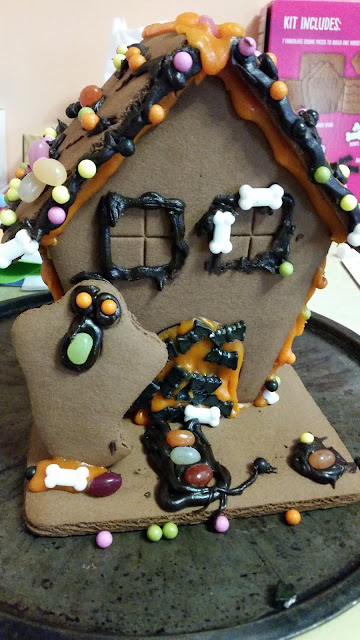 I have been slightly obsessed with the idea of a folding bike for quite some time now. I imagined that with such an apparatus I could store it in my trunk and deploy it for use between the parking lot and my office building (roughly one mile). I could avoid waiting for the unpredictable shuttle buses, as well as the sardine effect when the buses are full. Plus, it would allow for a little bit of exercise, something I don't get a lot of these days.

I recently saw a listing online and after a great deal of waffling I messaged the seller. Shortly thereafter my son and I drove to a pretty little village on a lake and I took possession of the bike.

Now I am not BIKE PEOPLE. I haven't ridden a bike in years. I doubt I've ever ridden a bike on a highly trafficked urban road. To say that I was nervous the first day is a major understatement. More like nauseous and shaking. I was terrified thinking about BUSES passing me and having to navigate a left turn. But now that I've been riding for a week, it turns out those things are not actually that scary.

SCARY is when person after person ambles out in front of me as if I have complete control over the machine I am on. I do NOT! I feel like I need a "Student Biker" sign. Riding on the road with cars is much less stressful than navigating crowds of oblivious people.

I also discovered a HILL that I was previously unaware of. Each morning my non-existent leg muscles scream as I crawl towards the top of the hill. Other bikers fly past me. I try to avoid eye contact with everyone. I wonder how long I have to ride before this bit gets easier.

Also, I guess I should probably invest in a bike helmet.

Email ThisBlogThis!Share to TwitterShare to FacebookShare to Pinterest
Labels: The Every Day

Yesterday I broke my own rule about not doing fall activities when it's hot out. But I wanted to go pumpkin picking and Halloween is two weeks away. Good grief, why is it still 80 degrees out? Anywho, the other complicating factor is the field we like to go to is not open on Saturdays for religious reasons and typically Saturday is our only opportunity for adventure. But because my ex and I flip-flopped days again this past weekend, we met my sister, her son, and our dad in the field moments after they opened.


We gathered many pumpkins from the field before heading to the corn maze. By that time it was hot and sunny and I was fading fast (still sick, whine, whine). After spending several years trying to escape the corn maze Little Man and I headed for home while the others waited for a hay ride. Maybe we can finally do that next year! Although I've seen pictures of other pumpkin patches that offer wheelbarrows, so maybe we need to consider picking elsewhere. It might make it easier for us old folks.

I was so exhausted after the heat and the maze that I slept for an hour and a half while my son was napping! I am really over feeling like crap.

This weekend felt a little unsettled for several reasons. My son's father asked to switch the days he gets our son (on Sundays I drop the little man off at his dad's house and then go grocery shopping). This week we did that on Saturday AND I went to a different store, so everything felt mixed up. On top of that the little man has a cold so isn't operating at 100%.

On Saturday morning after his dad dropped him back home we made apple crisp. We clearly picked WAY too many apples last weekend. The apple crisp hardly made a dent. Note to self: next year buy the kiddie bag.

Sunday morning we went on an adventure, driving to a picturesque village on a small lake. I would've liked to have explored a little more, but most things weren't open yet and the toddler wasn't in the best mood. Even at the park, he was unimpressed. Rocks! Where are the rocks? What is this stupid sand stuff?

Both afternoons were spent at our neighborhood park, playing on the playground. Little man is obsessed with "big kids." He follows them around, imitating what they say and do. It's adorable. Surprisingly to me, other kids keep assuming he's a girl. I don't think he has particularly feminine features, and he's usually dressed in shades of blue (although I guess the red shirt he's wearing in the photo above could be interpreted as pink). It's interesting to me that the mistake is most common with the elderly and with the young crowd (under 10). I don't care really and depending on the situation I may or may not even correct the person. I love his beautiful hair and he doesn't even know the difference between boy and girl. One of the big kids asked him,"Are you a boy or girl?" He was so delighted by the older boy's presence and said "Yes!" with great enthusiasm. Works for me.
Posted by a/k/a Nadine at 11:59 AM 2 comments:

On Saturday morning it was finally cool enough to go apple picking. I refuse to do fall activities when it's in the 80s. The farm opened at 10am, so we pulled into a parking spot at 9:55am. I chose a farm that is mere minutes from our house and one that my son is very familiar with. During the summer we go for farm animals and ice cream, so he was understandably a bit bewildered when I dragged him into the apple orchard. Next year I will know to do animals first, then apples, then MORE ANIMALS. But all told, it was a success. He even wanted to "go for walk" on one of the farm roads, so bonus. (I did have to carry him back because he is one directional. Forward, march!) 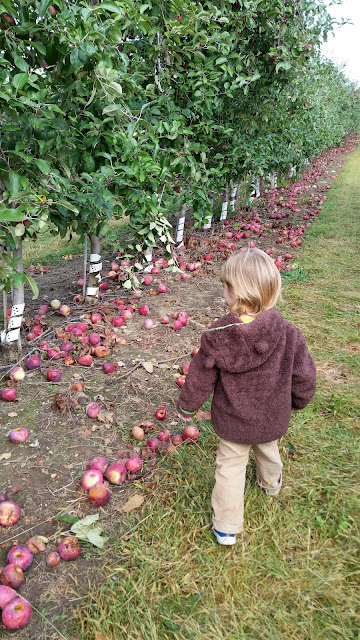 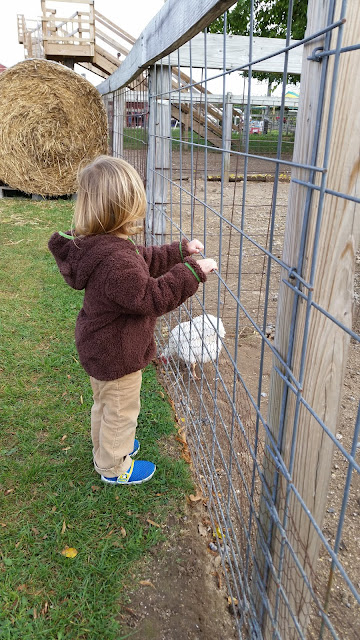 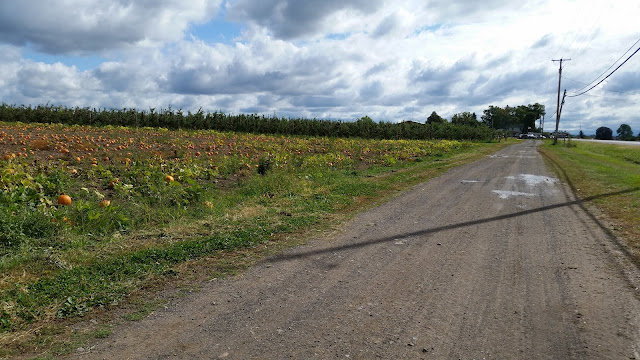 This wasn't a super productive month, but I surpassed my reading goal for the year and visited Second Home Nature Center twice. I've also continued to blog at least once per week, even if I can't count correctly. Lalala