I am not of the religious persuasion, but I am very rooted in tradition. Traditions both societal and familial are often very important to me, which is part of the magic of Christmastime. This year I feel more alone than ever before; in recent years I spent time with FF and his family, before that I spent time with close friends who were also away from home for the holidays, and before that I lived with my parents. This year it's just me, so yesterday I went in search of one of the traditions that I've come to hold dear over the years.

At Second Home Nature Center, I assessed the melting snow and elected to leave my snowshoes in the car (a decision I would regret soon). I ignored the "closed to walking" sign as I headed down one of the trails, but I was very careful to not step on the ski tracks. I still felt guilty though like someone was going to come along and yell at me! Second Home sets the ski tracks so I could easily walk in the tire tracks along the side where the snow had been fairly well beaten down by the tractor wheels. On my return trip I gave into my guilt and switched over to the snowshoe trail, which had not been so trampled and was therefore like walking in sand at the beach. What a workout!

But the goal of my hike was right where I'd known it would be, nestled beneath the stilted roots of a birch tree. 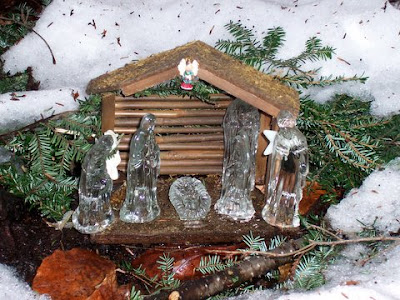 If you get too lonely, email me and we will keep you company. Try to enjoy a new experience and remember you are being though of on this day. Merry Christmas, sweetie.

That should have been thought of, not though of. Sorry!

One thing I love about that tradtion is how many people claim to be involved. SodaBoy worked with someone who said their family set it up every year, but my understanding is the nature centers staff hear all sorts of similar stories.

Although that walk sounds difficult, it also sounds peaceful. I hope it was, and I hope your holiday is too.

What a nice tradition :)

Is the creche made out of ice?

Merry Christmas, in this first year of finding new traditions to mix with the old!

I haven't seen that in years--I'd sort of forgotten it! Thanks for reminding me. :-D

Now I wish I'd made time when I was in town to go there. Not that there was much space for jamming in created time.