This morning I staged a three-pronged attack on the poison ivy growing in the front "garden." Stage one involved snipping the vines climbing the birch tree near the base. Stage two involved spraying toxic chemicals on the ground covering ivy. Stage three involved carefully ripping the vines off the trunks of the birch tree. I don't expect total success, but I'm hoping that I at least caused a pause in the takeover.
I also did a bit of trimming, which I wasn't supposed to do until after the next brush pick-up since my means of disposal are full. So that means I will now have a pile of stuff in the driveway that has come into contact with the dreaded poison ivy.
After I'd had my full of yard work for the day (let's pretend we didn't notice that the grass needs mowing), I headed out to Second Home Nature Center. Man, there's a lot of poison ivy there! Other than that, it was a lovely cloudy and cool afternoon.
Here I am at the Self-Portrait Bench: 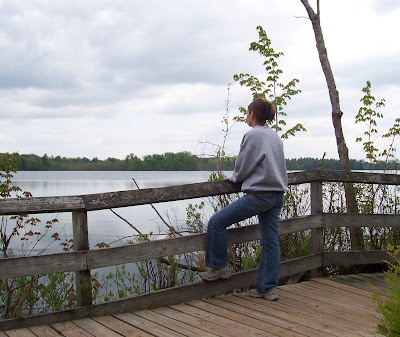 I take it you had the day off? Oh yeah, your summer schedule... I am so jealous.

Were you able to do all that without getting poison ivy?

I know I'd be covered with the rash, even if I wore gloves and such ....

I am not so sensitive that my rash appears immediately. It will be a few days before I see if there will be consequences to be suffered. I was very careful.

I can just look at poison ivy and be covered in it. I'm cringing at the thought of having to clear it... you are a braver woman than I!