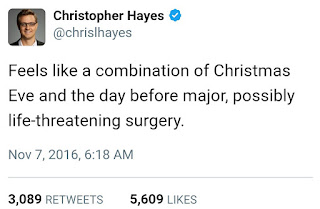 That tweet (which was shared on Facebook many, many times) pretty much sums up how I'm feeling.

I love voting. I believe in the importance of voting. Voting makes me a little bit giddy.

Having said that, I'm scared. There is so much at risk with this election.

I can't help but recall the 2000 election when I went to bed late on that Tuesday night confident our next president would be Al Gore and woke the next morning to find that was no longer the case. I lived in Florida at the time. I voted on a butterfly ballot and checked for hanging chads before casting my vote. And then I (and everyone else) lived through the madness to follow. I thought George W. Bush winning the election was the worst scenario imaginable. Little did I know that some years later we would be faced with a presidential nominee that makes W look like a welcome option.

So my anxiety is understandably high. My stomach is feeling unsettled. This is going to be a long day.

For the second time in his short life I took my son to our polling place, leaving the house extra early this morning. I filled in little circles while he fussed in the umbrella stroller which he hates (it was either that or he'd have been running around knocking over tables and stealing pens). When I finished I stared at the first circle I darkened, the most important circle, to take in the moment.

Then his fussing kicked up a notch and I stood up from my seat, pushed us to the short line at the casting machine, and seconds later inserted my ballot into the machine. When it dropped successfully I thrust both arms into the air, and then rushed us out the door and back to our regular schedule of work and daycare.

Email ThisBlogThis!Share to TwitterShare to FacebookShare to Pinterest
Labels: NaBloPoMo, The Every Day